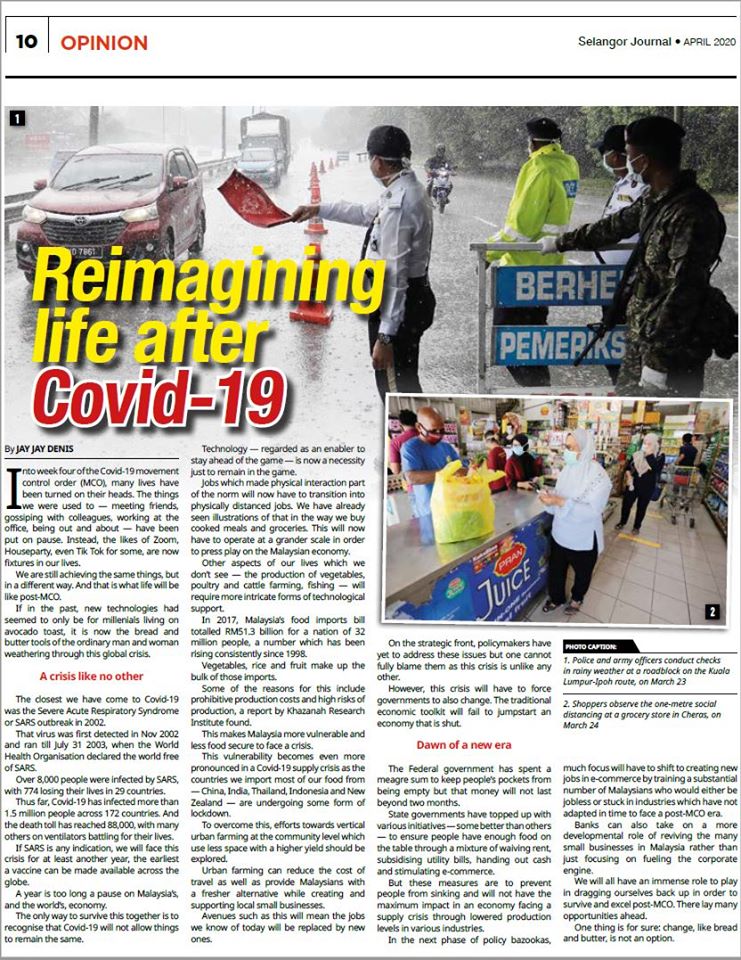 Into week four of the COVID-19 Movement Control Order, many lives have been turned on its heads. The things we were used to – meeting friends, gossiping with colleagues, working at the office, being out and about – have been put on pause. Instead, the likes of Zoom, Houseparty – even Tik Tok for some – are permanent fixtures in our lives.

We are still achieving the same things, but in a different way. And that is what life will be like post-MCO.

If in the past, new technologies had seemed to only be for millenials living on avocado toast, it is now the bread and butter tools of the ordinary man and woman weathering through this global crisis.

The closest we have come to COVID-19 was during the Severe Acute Respiratory Syndrome or SARS outbreak in 2002.

Thus far, Covid-19 has infected more than 1.5 million people across 172 countries. And the death toll has reached 88,000, with many others on ventilators battling for their lives.

If SARS is any indication, we will face this crisis for at least another year, the earliest a vaccine can be made available across the
globe.

A year is too long a pause on Malaysia’s, and the world’s, economy.

The only way to survive this together is to recognise that Covid-19 will not allow things to remain the same.

Technology — regarded as an enabler to stay ahead of the game — is now a necessity just to remain in the game.

Jobs which made physical interaction part of the norm will now have to transition into physically distanced jobs. We have already seen illustrations of that in the way we buy cooked meals and groceries. This will now have to operate at a grander scale in order to press play on the Malaysian economy.

Other aspects of our lives which we don’t see — the production of vegetables,
poultry and cattle farming, fishing — will require more intricate forms of technological support.

In 2017, Malaysia’s food imports bill totalled RM51.3 billion for a nation of 32 million people, a number which has been rising consistently since 1998.

Vegetables, rice and fruit make up the bulk of those imports.

Some of the reasons for this include prohibitive production costs and high risks of production, a report by Khazanah Research Institute found.

This makes Malaysia more vulnerable and less food secure to face a crisis.

This vulnerability becomes even more pronounced in a Covid-19 supply crisis as the countries we import most of our food from — China, India, Thailand, Indonesia and New Zealand — are undergoing some form of lockdown.

To overcome this, efforts towards vertical urban farming at the community level which use less space with a higher yield should be explored.

Urban farming can reduce the cost of travel as well as provide Malaysians with a fresher alternative while creating and supporting local small businesses.

Avenues such as this will mean the jobs we know of today will be replaced by new ones.

On the strategic front, policymakers have yet to address these issues but one cannot fully blame them as this crisis is unlike any other.

However, this crisis will have to force governments to also change. The traditional economic toolkit will fail to jumpstart an economy that is shut.

The Federal government has spent a meagre sum to keep people’s pockets from being empty but that money will not last beyond two months.

State governments have topped up with various initiatives — some better than others — to ensure people have enough food on the table through a mixture of waiving rent, subsidising utility bills, handing out cash and stimulating e-commerce.

But these measures are to prevent people from sinking and will not have the maximum impact in an economy facing a supply crisis through lowered production levels in various industries.

In the next phase of policy bazookas, much focus will have to shift to creating new jobs in e-commerce by training a substantial number of Malaysians who would either be jobless or stuck in industries which have not adapted in time to face a post-MCO era.

Banks can also take on a more developmental role of reviving the many small businesses in Malaysia rather than just focusing on fueling the corporate engine.

We will all have an immense role to play in dragging ourselves back up in order to survive and excel post-MCO. There lay many opportunities ahead.

One thing is for sure: change, like bread and butter, is not an option.

(This article first appeared on the Selangor Journal’s April 2020 edition.)